Cavity walls were introduced in 1932, the gap between external and internal walls would prevent penetrating damp. Any absorbed water would now drain down the cavity and not pass into the internal wall.

But by filling the cavity, they removed the protective air gap. If installed incorrectly, water could pass from the external to the internal walls. For many properties, filling the cavity was a costly mistake. Many homeowners are now suffering with damp as a result poor insulation.

Many properties throughout the UK are experiencing Penetrating Damp caused by saturated cavity wall insulation and where the cavity insulation has slumped to the lower levels.

Slumped insulation at the bottom of the cavity is often misdiagnosed as a DPC issue, and wrongly expensive injection DPC’s recommended when in fact only the saturated insulation needed to be removed. In addition we are experiencing properties with higher level damp patching that can be caused by an external defect allowing water to penetrate the insulation, and then in that area penetrate the internal wall. This can also be misdiagnosed as deteriorated wall ties causing damp spotting.

We carry out a non-intrusive inspection by drilling a small hole and inspecting the cavity with our specialist small end (8mm) cameras. With the camera we can review the condition of the insulation. Sometimes we might have to remove a brick and extract a sample of the insulation (this would be evidence for a future compensation claim, if required).

After we’ve completed the investigation and survey you will be provided with a detailing report outlining what work has been completed and the results. Although we do offer a cavity wall insulation removal service, we promise to provide you will an unbiased recommendations on how to fix the issues. 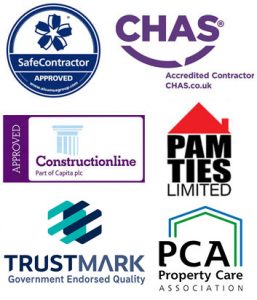