Propoint UK are domestic and commercial repointing contractors that are trading standards approved and all work guaranteed. We specialise in pointing for brickwork, stone and all aspects of masonry. We also provide specialist chemical cleaning services for brickwork and sandblasting for stonework. We have many trusted teams and offer our services throughout the UK including the Portsmouth area.

The Benefits of Brick Repointing

Brick pointing is the best value way of restoring the condition and physical appearance of a house, it forms an important part in a building maintenance. Advantages of Brick pointing include:

We have an experienced brickwork pointing and property renovation team for Portsmouth. We supply brick repointing and different forms of property restoration services for both big business premises and residential houses in and surrounding the Portsmouth area.

ProPoint UK’s professional Portsmouth team of hired builders have a real knowledge and commitment to the practice of aged period facades. Our target is always to recover a properties brick or stone wall facade to its highest standard.

The types of properties vary, therefor the team use good building understanding to select the correct traditional materials and techniques suited for that particular building.

A large majority old brick houses and walls in Portsmouth were built with lime mortar and the need to continue this trend is essential to the health of a old property or wall. A large number of Victorian buildings will probably have been built from lime mortar, not cement. So it’s essential that cement is not used in repointing. When cement is used, the movement common in older buildings will likely result in damage to bricks (this is also an important aspect of church and cathedral restoration)

What is the cost of repointing?

Depending on the current condition and size of your property, it should cost between £20-£40 per metre-squared in Portsmouth. You might require scaffolding and other access, this may add to the price. It isn’t cheap, but repointing is well worth it. New repointing work will likely last 50-100 years, so you won’t need to do it again in your lifetime!

You will likely avoid expensive repair works that may be required if moisture gets in through cracks in your pointing work and increase the overall value to your house or business property.

The word “Pointing” is the visible outside face of mortar joints, these joints show between brickwork on the surface of the external wall. “Re-pointing” (also called Pointing Up) describes the restoration of pointing. This is required after the mortar has been lost due to age. After time, weather damage and general decay can result in voids in the joints between brickwork and stone. These voids will let water to enter, potentially resulting in serious damage and dangerous damp.

When does a house or building require Repointing?

It is crucial that you have the knowledge to identify when you need to repoint your property. The identifying process is very simple. When examining the wall, a great guide to go by is to measure the depth against the height of the mortar gap. When the depth matches the height of the mortar filling, it’s time to get repointing. You can also simply use your finger to test the pointing, try digging a finger into the joints in the bricks and see if any pointing breaks away. Try this in multiple areas around the back and front of the house.

Portsmouth (/ˈpɔːrtsməθ/ ( listen)) is a port city in Hampshire, England, mainly on Portsea Island, 70 miles (110 km) south-west of London and 19 miles (31 km) south-east of Southampton. It is the United Kingdom’s only island city and has a population of 205,400. The city forms part of the South Hampshire built-up area, which also covers Southampton and the towns of Havant, Waterlooville, Eastleigh, Fareham, and Gosport.

The city’s history can be traced to Roman times. A significant naval port for centuries, Portsmouth has the world’s oldest dry dock and was England’s first line of defence during the French invasion in 1545. Special Palmerston Forts were built in 1859 in anticipation of another invasion from continental Europe. By the early-19th century, Portsmouth was the most heavily fortified city in the world, and was considered “the world’s greatest naval port” at the height of the British Empire throughout Pax Britannica. The world’s first mass production line was set up in the city, making it the most industrialised site in the world. During the Second World War, the city was a pivotal embarkation point for the D-Day landings and was bombed extensively in the Portsmouth Blitz, which resulted in the deaths of 930 people. In 1982, a large proportion of the task force dispatched to liberate the Falkland Islands deployed from the city’s naval base. Her Majesty’s Yacht Britannia left the city to oversee the transfer of Hong Kong in 1997, which marked for many the end of the empire. 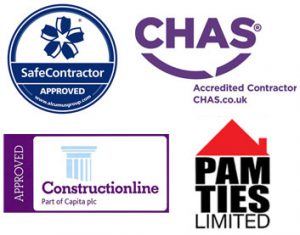